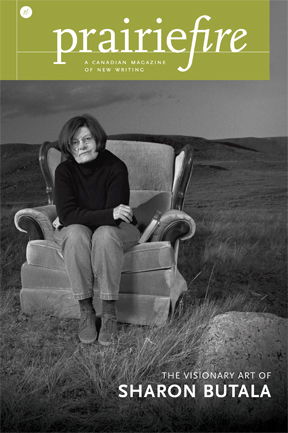 Cover Image: Photograph of Sharon Butala by Duane Prentice
Duane Prentice is a cinema stills, documentary and fine art photographer. He is listed in the Magenta Foundation's Carte Blanche and has worked with international photographic agencies, as a freelancer with the Globe and Mail, and on personal documentary and fine art projects. www.nomadicvisions.com
Fall 2012, Volume 33, No.3
The Visionary Art of Sharon Butala
This issue contains a special section, edited by Geoff Hancock, presenting reminiscences, essays and interviews celebrating Sharon Butala as a literary writer, historian and conversationist. It includes a previously unpublished story by Butala. Featured as well are wonderful stories and poems by regular contributors.
Table of Contents

Geoff Hancock Hidden in the Grasslands
Sharon Butala Scourge of Africa
Phyllis Bruce An Appreciation of Sharon Butala's Perfection
Lee Gowan Our First Meetings
Monty Reid Five Remembrances for Sharon Butala
Sharon Butala Old Man On His Back: A Private History
Danielle Schaub Multiple Visions of Space in Old Man On His Back
Aubrey Streit Krug Who Knows? Fictional Women and the Reality of Small Towns on the Prairie
Megan Riley McGilchrist "The Place Where Words Stop"
Geoff Hancock An Interview with Sharon Butala
Frances W. Kaye Sharon Butala: Writing for Survival
Pam Chamberlain The Puzzling and Mysterious Other: Animals in The Perfection of the Morning
Ted Dyck By the Light of the Lilac Moon
Kerry Clare True Crime
Verna Reid The Construction of Self in The Girl in Saskatoon
Sharon Butala Finding the Hidden Manuscript Within
Sharon Butala Living in the City
Clea Young What Are You Good at, What Do You Like to Do?
Giles Benaway Two Poems
Amy Jones Team Ninja
Joan Shillington Innocence
Anthony Jeffery What Doesn't Kill You
Emily Carr Two Poems
Phyllis Rudin Loathe Me or Leave Me
Josh Stewart Theseus to Ariadne
Dee Hobsbawn-Smith Pottery in the Cyprus Hills
Andrew Boden Leech Day
Moez Surani Untitled Poem

Fiction Excerpt
What Doesn't Kill You
BY Anthony Jeffery

There were a lot of stabbings in my family. My brother Bill stabbed Jim by accident. I stabbed my sister, Hannah, in the stomach with a penknife because she stole my makeup compact. I was only twelve and I couldn't be charged. Not that Hannah would have charged me. Who could she go to besides Mother? The cops in North Bay would have died laughing.

Poetry Excerpt
Pottery in the Cypress Hills
BY Dee Hobsbawn-Smith

Walking these prehistoric hills on tufted grass,
I imagine the sea
of ice dragging rubble
across their ribs. The glacier's retreat
scratched out a belly made small by sky,
clouds absorbing the forgotten
footfalls of metatarsals.

Non-Fiction Excerpt
Finding the Hidden Manuscript Within
BY Sharon Butala

I came to writing through my own inner, personal, spiritual struggles, mostly written of in The Perfection of the Morning, through that truly desperate struggle to understand myself, my own motivations, my personal “shadow,” as Jung calls it, and to dissect interactions with others so that I could find some inner, final place on which to stand and from which all my life would be directed. Irony? It never crossed my mind. I disliked it when it finally did. The use of it struck me as effete and unnatural, as writing-from-models, rather than writing-from-life. I think, or writing as illumination, actually, knowing practically nothing about it (I know), that this is that bad side of creative writing programs: too many models valuing too much the wrong things, and killing the genuinely fresh and original. This was probably the best thing about my having had to teach myself to be a writer while I lived in nearly complete isolation—there was no Internet, no smart phones, barely personal computers—out in the middle of nowhere for more than thirty years, uninfluenced by anything but published literature, the natural world in which I made my life, and this tiny, strange culture into which I’d been thrust.