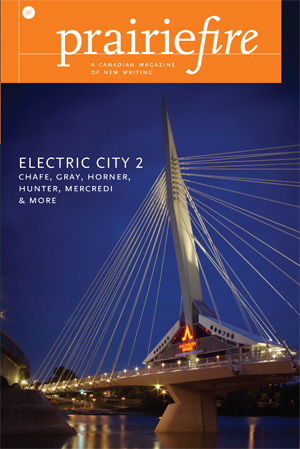 Cover Image: Esplanade by Bryan Scott
Winnipeg photographer Bryan Scott has been documenting the city’s architecture and streetscapes since 2005. In 2013 he partnered with Winnipeg journalist Bartley Kives to publish Stuck In The Middle: Dissenting Views of Winnipeg. He maintains the photo blog Winnipeg Love Hate.
Spring 2015, Volume 36, No.1
Electric City 2
In addition to our usual excellent content, this issue features a second selection of writing from Winnipeg poets, fiction writers & playwrights – 26 in all – along with a photo-portrait of each by Bob Tinker.
Table of Contents

My father always told me, “If anything terrible happens, treat yourself to a nice meal.” Advice passed on from one generation to another, a recipe for a history of starvation, but I didn’t know that. I only knew Chinese five-spice BBQ pork with pineapple and red glaze, fish and chips bundled in greasy newspaper, corned beef boiled in eggs, rotisserie chickens leaking orange condensed steam over tinfoil. I knew sweet and sauced and salty and, later on, spiked. I knew broiled and fat ’n’ happy. I knew how to drink a bad day out of a gravy boat. It wasn’t that there was never enough, it’s that there was never anything to begin with.

The signs are unreliable
and the houses are sheltered by a rise.

Two boys charging their bicycles up the incline,
trying to chase.

There’s a store and a baseball diamond and Big Bear’s here too
by the road in and out; they’ve made a place for his bones.

Well, what if I met a man, you see, and he wanted to marry me, start a family with me, have kids and all that, he would want to know about my family, naturally, so I would have to start telling him about my family, and he wouldn’t even wait till I was finished, would he, the man, he’d come up with some excuse to get out of it with me. I’d have to start with my mother. I mean we all start there, don’t we?