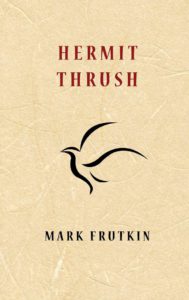 It might seem that Mark Frutkin takes no risks in his fluid and lyric collection Hermit Thrush, but listen closer and you’ll hear the ominous vibration of a thrumming string. The risk Frutkin takes is to remind us that death comes for everyone. While this fact may shake most people, Frutkin walks towards it fearlessly.

His poems underscore his awareness that one meagre human life is equal to nothing except as it flows into and out of the essential whole. He celebrates this by bringing our attention to the power of stillness. In “Listening for Silence” he tells us, Someone closes the door to a shed – / I will go on listening / for silence / until nothing but silence remains (38).

In “Cathedral of Chartres”(13), Thirty-thousand workers / build a cathedral in silence. During the building of the cathedral of Chartres the workers, architects and everyone associated with it kept a vow not to speak. Frutkin is struck by the challenge of maintaining silence though all the years of its construction. In the poem, the sounds of carts clattering or workers grunting come and go, but no human voices are heard, even the warblers cease their singing. And then comes thunder approaching / from miles across the plain. Everyone turns, notices, a nearby brook / unable to curb its babbling. Listen, Frutkin tells the reader, to what cannot be quieted.

Frutkin lists the impossible tasks that we might attempt in an effort to make ourselves believe we can accomplish something worthwhile. Try to do this, he says: Split the wind in two and this: Empty emptiness and count it (14). Or try to find liberation; it will be as difficult as Throwing rice to the moon (20), or as simple as Dumping a wheelbarrow full of air (60).

Reading this collection, I was often struck by his attention to the contradictions that arise in any given moment. In “A Walk in the Gatineau Hills with Basho”(16), he touches upon the old poet’s calm pool mind but reminds us that any notion of tranquility is transient in nature where black flies and mosquitoes feed and blue jays shriek.

Try to get close to the clearing, he tells us in “Chaos and the Ox” (62), and you’ll find chaos soon rushes back. There’s too much life in living, but if you delve deep you’ll find within you the beauty of the hermit thrush / fluting from its shadowy haunt / just before dusk / when the curtain comes down / and silence.

The theme of the collection, repeated like a mantra, is that nothing endures. Time passes in “Monet’s Garden” (21) just as the water / never ceases flowing / under the Japanese bridge. In “Nothing Stays Still” (18), red tulips in the vase / execute a slow / three-day prostration. In “Written in Pencil” (71), everything can be erased here / everything can disappear in a moment (66). The physical is but a copy Leaving me holding / nothing / but light in my hands.

Is there any way to stop this inevitable disappearance? Frutkin answers in “Opening the Mouth” (49) where he describes how in Egypt, corpses’ mouths were stuffed with rocks so they could continue to speak and in “Heraclitus by the River” (57): He’s holding together still / falling apart. The answer is always within you / inside the confusion (62-63).

Frutkin tells us the secret is simply to keep living. He reminds us that a poet does have one helpful instrument for navigating life—the pen of your ribs. Deep listening can be an answer, and the poet can try to capture a moment Like one star reflecting in a hundred bowls / Like a hundred stars reflecting in one bowl (72).

In the final poem of the collection, as if to reinforce his own joy in being a poet, he says,

No matter the time of day,
day of week, your state
of mind or which of the manifold
diseases is finding your organs a home
in which to raise its children,
you can still write poems —
about walking through the garden
with a pair of hummingbirds for eyes,
about the sun’s interrogation of the moon
or what happened at the zoo.

The ones who want another answer might come knocking at your door, / having imagined all the wrong symbols in your poems, / but you will have disappeared / into the words (76).

Lesley Strutt is a poet, playwright, essayist and blogger living in Merrickville, Ontario. Her writing has appeared in anthologies, e-zines, as well as journals such as The Literary Review, Bywords, Canadian Woman Studies, and Leaf Press Monday’s Poem.