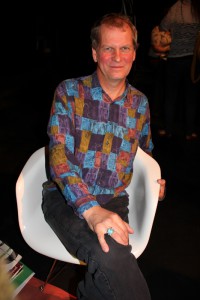 Congratulations to Harold Hoefle for winning the silver award for poetry at this year’s National Magazine Awards! His poem “A Loving Follow-Through” also won the 2014 Banff Centre Bliss Carman Poetry Award and was published in Prairie Fire vol. 36, no. 2. Here it is again:

At least it’s not dripping off the kitchen table,
the wet cereal of my brain, but the front room’s got
my Kyla and Jimbo, I hope not messy like me,
and he’s already gone, he eff-ed right off,
the screen door banging at that orange moon,
and it was so him to do us after dark,
but that’s my Brian, it’s like I married
every nasty bit in the ten o’clock news.
Good that he called 911 (someone should mop),
though now for-sure he’s barrelling out of town,
whipping along the ditch with a bottle in his crotch . . .
and isn’t cereal a weird word? I am (was) serial,
as in serially attracted to the Brians,
the ones who chug whisky like beer,
who brag I’ll sleep when I’m dead—those guys.
So there’s me with my loser beacon, Yvonne told me,
blonde to blonde, party girl to party girl.
She opened and shut her fist in my face,
said that’s your forehead winking at crazies.
Guess it’s true, I could never get past men like him,
as if Brian were just the end product, exactly that,
but he’s the one I chose, the one with the wooden bat,
taking down the world that tried to take him down,
and starting right at home with a big wind-up,
a smooth swing, and a loving follow-through.